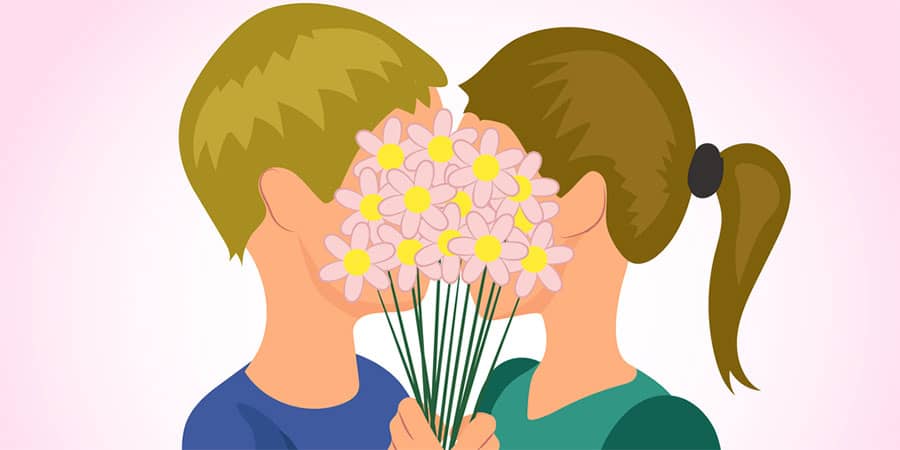 Though ENFJs and ESTPs are very different personality types, it’s important to remember that there’s no ideal Myers-Briggs personality pairing. Under the best of circumstances, partners in an ENFJ/ESTP pairing will capitalize on their differences and be stronger for it.

THREE REASONS WHY ENFJ AND ESTP ARE GOOD FOR EACH OTHER

When ENFJs and ESTPs can see beyond their differences to form relationships, they can be good for one another. Three reasons these types may benefit each other are:

ENFJs and ESTPs are both extroverted personalities; both types enjoy the company of others and use socializing as a means of recharging.

ENFJs and ESTPs approach plan-making differently; ENFJs tend to prioritize the overall goal, sometimes at the expense of critical details. ESTPs, on the other hand, focus on details, often to the detriment of the overall plan. Together, these types are well-positioned to cover each other’s blind spots when planning for the future.

Making plans isn’t the only area where ENFJs and ESTPs can benefit from one another’s perspective; these types complement each other quite well. For example, the ENFJ’s values-driven personality counterbalances the ESTP’s logic-driven approach.

Not all ENFJ/ESTP pairings will be able to navigate their vast personality differences successfully. The following are three reasons ENFJs and ESTPs may not be suitable for each other:

ENFJs and ESTPs have different communication styles; ENFJs generally communicate more abstractly, preferring to discuss ideas, whereas the practical ESTP would rather keep the conversation in the realm of what can be observed or otherwise verified.

Different, potentially opposing values are another reason ENFJs and ESTPs may not be good for each other. ENFJs tend to embrace the idea of positive change; ESTPs, on the other hand, are generally traditionalists who are reticent of change for change’s sake.

ENFJs and ESTPs have different tolerances for disorder in their environment. ENFJs generally have a lower tolerance for disorder than their ESTP partners; this can prove problematic as the ENFJ will likely find themselves doing the lion’s share of the cleaning and organizing. 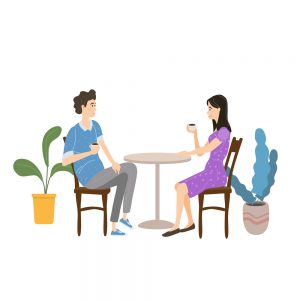 Healthy communication is crucial in every successful relationship; how a couple shares information can be the difference between a failed relationship and long-term contentment. The ENFJ/ESTP couple will have to navigate some challenges regarding communication, challenges that will require both partners to do some compromising and reach beyond their comfort zones.

Expressive and energetic communicators, ENFJs, and ESTPs enjoy lively conversation and are likely to appreciate this quality in their counterparts. Partners in an ENFJ/ESTP relationship, at the very least, won’t be starved for conversation.

Though both personality types relish conversation, several areas might potentially prove problematic for the ENFJ/ESTP couple. For example, ENFJs generally have a more abstract communicative style than their practically-minded ESTP counterparts. This mismatch can result in misunderstanding if both partners don’t appreciate the other’s communicative preferences.

Because ENFJs and ESTPs are both extroverted, verbally-expressive types, one or both partners may feel they aren’t allowed equal time to talk. Nobody likes to feel like they’re being spoken over or have to fight to get a word in.

Problems may also arise for the ENFJ/ESTP couple because of the ESTP’s sometimes blunt manner. Straightforward communicators, ESTPs aren’t always aware of how their less-than-tactful approach might be perceived by feeling types such as ENFJs.

ENFJ/ESTP couples can improve their communication by agreeing to share the role of listener. Partners in an extrovert/extrovert pairing, such as the ENFJ/INTP couple, may benefit from setting informal rules regarding who speaks and who listens.

WHERE DO THEY CONNECT, AND WHY?

ENFJs and ESTPs experience and interact with the world in very different ways; when they meet, they aren’t likely to find they have much in common. Indeed, it will likely take a shared hobby or mutual friend to draw these two disparate personality types together.

Few things define an individual as clearly as what they hold dear. What a person, or personality type, values affect nearly every aspect of their lives, often right down to their choice of occupation.

Perhaps above all, ENFJs value other people and their feelings. This desire to help manifests in nearly every facet of the ENFJ personality; often, even an ENFJs choice of career reflects this value.

ENFJs also value achievement. Unlike their ESTP partners, who are more interested in just enjoying the ride of life, ENFJs take pride in working hard.

Structure and organization are also highly valued by the ENFJ. This type prefers order in their schedules and physical environments; unlike their ESTP partners, ENFJs like to have things ordered and settled.

Unlike their ENFJ counterparts, ESTPs place a high value on tradition; this type appreciates the systems and institutions that benefit humankind and is reticent to tinker with what works.

ESTPs value action and activity; they are sensing types and value activities that stimulate them physically. Unlike their ENFJ partners, they spend little time worrying about theories and ideas, preferring to take action.

Freedom is another thing ESTPs value highly. Compare the schedule of an ESTP to an ENFJ, and you’ll find the former is happy to trade some organization for a degree of freedom.

Very little overlap exists regarding what ENFJs and ESTPs value. Partners in a successful ENFJ/ESTP relationship will have to be okay with disagreeing on some important issues and try to see their value differences as opportunities for personal development. 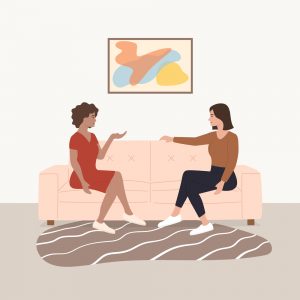 ENFJs and ESTPs generally don’t have much in common, but they do speak similar love languages. Two of the three most common ways each type expresses love for their partners are the same.

The most common way ENFJs show love to their partners is by spending quality time with them. Extroverted types need a lot of socializing, so spending quality one-on-one time is a significant show of love for the ENFJ.

Speaking words of affirmation is the second most popular love language among ENFJs. This makes perfect sense, as ENFJs are a verbally-expressive personality type. Rounding out the top three love languages of the ENFJ is physical touch.

Like their ENFJ counterparts, ESTPs spend quality time with their significant others to show affection. Performing acts of service is the second most common way this type expresses love. Coming in third, as it does for ENFJs, is the use of physical touch.

ENFJ AND ESTP IN BED

ENFJs are compassionate people concerned with the experiences and feelings of others; this personality trait often manifests in the bedroom, where ENFJs tend to make attentive and loving sexual partners. ESTPs also tend to be attentive lovers; they aren’t easily distracted and strive to be as “in the moment” as possible.

HOW DO ENFJs AND ESTPs MATCH UP IN LONG-TERM ROMANTIC RELATIONSHIPS?

ENFJs and ESTPs aren’t generally considered highly-compatible Myers-Briggs personality types, but that doesn’t mean they’re incompatible. For example, the ENFJ male/ESTP female couple has at least a reasonable shot at long-term happiness, provided the ESTP female doesn’t perceive her feeling partner as being overly or needlessly emotional. On the other hand, trouble may also result if the ENFJ male finds his ESTP counterpart to be tactless or blunt.

Conflict is built into every relationship; how a couple communicates and resolves conflict is a good indicator of how successful the relationship is likely to be. Being so different, partners in an ENFJ/ESTP pairing can be sure of dealing with their share of misunderstanding and disagreement.

POSSIBLE AREAS OF CONFLICT (AND WHY)

All relationships must weather some conflict, and the ENFJ/ESTP couple is no exception. When conflict arises between partners in an ENFJ/ESTP relationship, it’s often for one of the following reasons:

ENFJs and ESTPs have very different perspectives on the purpose of life and the state of the world. ENFJs are driven by their compassion for others; they factor the feelings of others into nearly all of their decisions. The far more practical ESTP may find their feeling partners overly idealistic or downright unrealistic in their goals.

Differing tolerances for disorder can also cause problems for the ENFJ/ESTP pairing. ESTPs are, generally speaking, far less likely to be bothered by a disordered environment than their ENFJ counterparts. As such, the ENFJ partner often finds themself handling most of the straightening up around the house or apartment.

ENFJs and ESTPs have different approaches to conflict resolution. The ENFJ generally has difficulty with conflict; it often leaves them feeling sad or worse. As such, this personality type tends to put off dealing with potentially troublesome issues until they have little or no choice.

ESTPs, on the other hand, are practically minded; they prefer to address potential trouble immediately. When resolving conflict with their ENFJ partners, ESTPs would do well to check their tendency toward bluntness and keep their partner’s feelings in mind.

ENFJs don’t have as hard a time trusting other people as some other Myers-Briggs personality types, but they do have issues relating to trust. For example, ENFJs are often reticent to let people get too far inside, lest they wind up being hurt.

ESTPs sometimes have difficulty trusting others; it isn’t that they don’t love other people or enjoy their company, but that this type prides itself on independence. Unless they know the other person well, trusting another to do what must be done is truly an act of faith for the ESTP.

Though different in most ways, ENFJs and ESTPs are well-positioned to form solid and mutually-beneficial friendships. Successful ENFJ/ESTP friends make the most of their value and personality differences, recognizing in them opportunities for self-development.

ENFJ VERSUS ESTP: APPROACH TO FRIENDSHIP

The assertive and nurturing ENFJ is a natural leader with an attractive and powerful personality. Generally speaking, this type has little trouble attracting and maintaining friends. ESTPs are often the life of the party and, like their ENFJ counterparts, have little difficulty making friends. ESTJs thrive on being in large groups and are often the center of attention in social situations.

As different as they are, ENFJs and ESTPs are complementary in many ways. These types can bolster one another’s weaknesses with their natural strengths, making them stronger as friends than they would be individually.

Despite their significant personality differences, ENFJs and ESTPs have the potential to form mutually-beneficial and rewarding friendships. In many cases, their differences are what make the ENFJ/ESTP friendship stronger than either partner would be on their own.

For example, the values-driven ENFJ is well-positioned to remind their logical ESTP partner of other people’s importance and feelings. On the other hand, the practical ESTP can help the feeling ENFJ when tough decisions must be made.

As touched on above, it often takes a shared interest, mutual hobby, or common friend to bring these two personality types together. That said, once these types are willing and able to get to know one another, they have the potential to be very close, even intimate, friends.

ENFJ/ESTP friends are vulnerable to many, if not most, of the potential pitfalls facing ENFJ/ESTP romantic partners. Different tolerances for disorder in their environments, different communication styles, and potentially opposing values are all areas that may cause ENFJ/ESTP friends trouble.