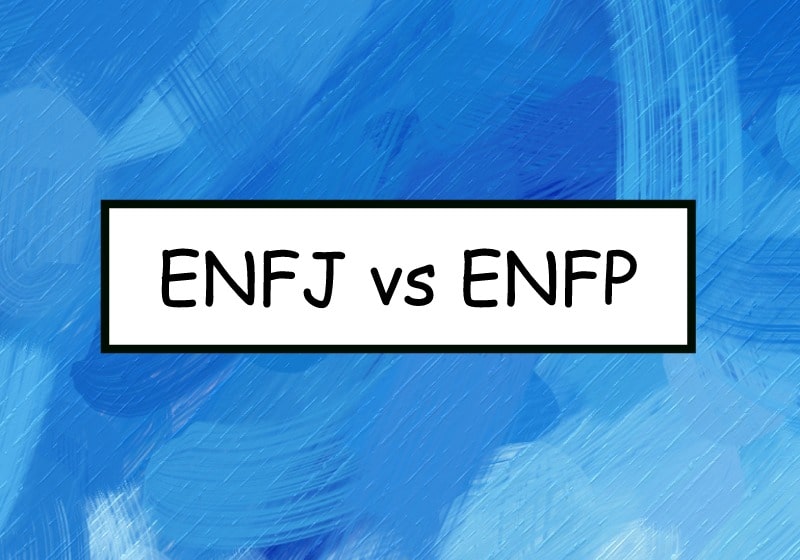 ENFJ personality types are Extraverted, Intuitive, Feeling and Judging. They are endlessly optimistic, analytical and passionately energetic souls who encourage others to be the best versions of themselves.

ENFP personality types  are Extraverted, Intuitive, Feeling and Perceiving. These high-spirited and creative individuals are always coming up with new ways to inspire others to work for a better world.

If you aren’t sure sure which type you are, take the personality test.

Both ENFJs and ENFPs are extraverts who are enthusiastic, creative and love helping people. But there are differences between them.

The key difference between ENFJs and ENFPs lie in how they do what they do. ENFPs inspire others with their communication abilities and their passion. ENFJs do the same thing but also translate their excitement into meaningful organization and systems. So ENFPs are more feeling-oriented while ENFJs are more action-oriented.

ENFJs are natural born leaders. They are in touch with the emotional needs of others and are the type of people you can count on when things get difficult. They are idealists who use their analytical and organizational skills to achieve goals and solve problems. They are great motivators because of their genuine interest in people’s lives. Sometimes they become overly invested in their work and may get frustrated or bossy. Ideal professions for ENFJs would be politicians, career counselors, teachers, coaches and social workers. Famous ENFJs include Katy Perry, Abraham Lincoln, Barack Obama and Oprah Winfrey.

ENFPs are gregarious individuals who care deeply about people and strive to make a positive difference in the world. They are energetic and very creative, often coming up with new and fun ways of inspiring people. They’re articulate and can channel their empathy into meaningful dialogue, giving them the reputation for being great communicators. They do tend to overthink things in certain situations and can get distracted if overwhelmed. Ideal professions for ENFPs would be entrepreneurs, sales, performers, EMTs and teachers. Famous ENFPs include Mark Twain, Rachel Maddow, Tom Brady and Gwen Stefani.

ENFJs and ENFPs are empathetic, people-oriented doers who spend their time encouraging and helping others. The question is, does this proclivity for doing good works keep them from being happy themselves?

To the rest of the world, ENFJs seem extremely happy. They are so involved cheering everyone else on that they may forget to take care of themselves. They’re also perfectionists, so even if they excel at one thing, they may be disappointed by other areas of their lives. Keeping perspective is key for an ENFJ to be happy.

Just like ENFJs, most people think ENFPs are happy, bubbly people getting the most out of life. While that may be true, ENFPs give so much to others, they may forget to take care of themselves. They are also more analytical than ENFJs and may spend too much time pondering the meaning of happiness rather than actually allowing themselves to be happy.

After an exhausting month spent passionately working on a political campaign, an ENFP and an ENFJ will have slightly different reactions. The ENFP will know they need a break and will happily take time alone to work on different projects. The ENFJ will also take time away but will dwell on their performance with the campaign and may obsess about what they could have done better.

For different reasons, ENFJs and ENFPs may struggle to make decisions. An ENFJ strives to make everyone happy with their decisions, which can be tricky. The ENFP will hesitate in deciding, hoping to leave all options open for as long as possible.

ENFJs know decisions must be made but may be hesitant to make them. They want all people involved to have a voice and for everything to be fair. When that can’t happen, they may feel paralyzed and not want to do anything until they can figure out another option.

Issues ENFJs May Have with Making Decisions

ENFPs can sometimes have a hard time making decisions. They see so many possibilities that are outside of the box that they are reluctant to commit to anything that may stifle them later. Still, they are good at considering other people’s feelings and are willing to compromise.

Issues ENFPs May Have with Making Decisions

If an ENFP was assigned the task of designing a new break room for the office, they would seek everyone’s opinion. They would also want their break room to be completely unique. They may have trouble committing to a design because are caught up in being creative. An ENFJ, rather, would want to make a decision but would need to talk to everyone and hear their break room needs. If some of those needs were contradictory, making a decision might be a problem because the ENFJ couldn’t please everyone.

Typically, ENFJs and ENFPs both make an effort with their appearance because they spend a lot of time with others and want to present themselves as someone to be taken seriously.

As perfectionists, many ENFJs take time keeping up their appearance. They’ll be aware of fashion and will make sure that their clothes are appropriate for the occasion.

ENFPs command attention — they’re leaders and may often speak in front of crowds, thus they understand that a good appearance is a necessary tool to help them engage with others. They would not want to appear messy but sometimes like to add a little flair to their fashion basics.

If a friend of an ENFJ bought them a wildly-colored, over-the-top scarf as a gift, they would effusively thank them and probably put it away in a drawer for safe keeping. Wearing something that didn’t match anything they owned might not be their style. An ENFP, on the other hand, would also thank the friend and might actually wear it. They tend to love quirky statement pieces and are often willing to set their own trends.

ENFJs and ENFPs both have active social lives and are likely to have big circles of friends. They take their friendships very seriously and pride themselves on being supportive and understanding.

ENFJs are naturally focused on other people. They can relate to any personality type and their warmth and friendliness make even passing acquaintances feel like old friends. They take genuine pleasure in being gregarious and are open to many different world views and perspectives.

An ENFP’s outgoing and energetic personality thrives on interpersonal connections. People of all personality types are drawn to them and they are just fine with that because of their unique ability to find common ground with everyone.

If a friend is thinking about starting a difficult course of study but is unsure if they’re up to the task, the ENFJ will be very encouraging and supportive. They will urge the friend to challenge themselves and promise them they’ll be better for the effort. The ENFJ may even go overboard, pressuring the friend because their own standards are so high. An ENFP in a similar situation will also encourage the friend but wouldn’t be quite so dogmatic about personal achievement. They would help the friend make the decision that is the best for them.

ENFJs and ENFPs can’t stand injustice, selfishness or behavior that makes people suffer. They don’t like to get angry but will on behalf of other people. They have different ways of managing that anger, however.

ENFJs tend to feel guilty when they show anger. They hate to hurt others and consequently often push aside angry feelings and distract themselves with other things. Bottling up anger doesn’t always work and if pushed, ENFJs can snap.

ENFPs spend so much of their time upbeat, optimistic and energetic, it should come as no surprise that they don’t like to get angry. They do get angry, of course, especially at injustice or for something that negatively affects other people. Still, they will tend to downplay their anger and instead choose to focus on positive emotions.

If an ENFJ walks into a friend’s place of work and sees that friend being belittled by a coworker, they will likely get angry. They may quickly jump to their friend’s defense and yell at the aggressor. After a moment, the ENFJ will apologize to both parties for their outburst and will try to use their communication skills to make everyone get along. In the same scenario, an ENFP will be equally as angry on behalf of their friend but wouldn’t immediately intervene. They may hang back and wait to see what happens, or they may try to diffuse the situation with distraction.

In summary, ENFJs and ENFPs both adore working towards making the world a better place by using their charisma and people skills. They inspire countless others to be successful but need to make sure they take time to tend to their own needs as well.