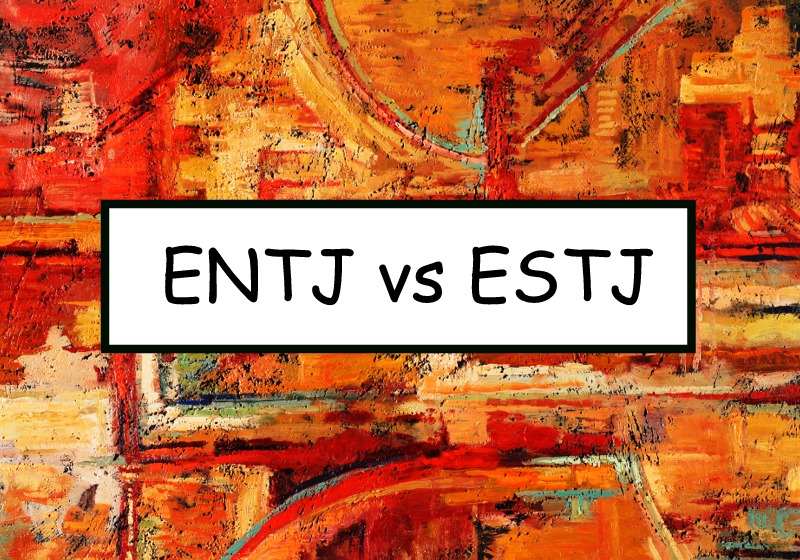 ENTJs and ESTJs both possess enthusiasm, intelligence and impressive leadership skills. Using their brash and sometimes daunting personalities, they routinely inspire others to accomplish objectives and pursue goals. However, they have some differences.

Key Differences between ENTJs and ESTJS

ENTJs are charismatic, decisive, hard-nosed, and live to take charge and lead others. ESTJS, on the other hand, are leaders who gladly bring order to chaos; they are formidable and a little intimidating but will get things done. ENTJs and ESTJs have different thought processes and leadership styles but very often achieve similar, successful results.

ENTJs are confident, competent and ambitious. Their work-life tends to define them and may be their primary source of joy. Typically, all social endeavors or activities outside of work are tailored to contribute to the success of their career. Their charisma and ruthlessness may be intimating to some but the results they achieve are undeniable. As compared to their active intellectual life, their emotional life tends to be underdeveloped and thus personal relationships may suffer. Ideal professions for ENTJs would be a business person, lawyer or entrepreneur. Famous ENTJs include Quintin Tarantino, Margaret Thatcher, Gordon Ramsey and Whoopi Goldberg.

If you need a job done right, you might want to call an ESTJ. Using a combination of fact gathering, traditional values and their own experiences, they’re excellent problem solvers. They are blunt, no-nonsense leaders who do not suffer fools gladly. They are also tireless workers but do enjoy their downtime as well, especially taking a great deal of pleasure in their families. Ideal professions for ESTJs would be a judge, manager or police officer. Famous ESTJs include Colin Powell, Bette Davis, Lyndon Johnson and Judge Judith Sheindlin.

Both ENTJs and ESTJs are driven personalities who thrive on leading others. While a successful work-life is important to each, it may be the ENTJ’s primary source of happiness.

Nothing makes an ENTJ happy like triumphing over a difficult challenge. They are tireless workers who are striving for the next achievement in order to feel fulfilled. They may not have many non-work related pursuits, so it’s important for them to seek balance in their lives especially in regards to their interpersonal relationships. Here are some features of ENTJ happiness:

ESTJs are happiest when there’s a place for everything and everything is in its place. Order and tradition tend to be their frameworks for success. They take work very seriously but still make time for friends and hobbies which they enjoy immensely. Here are some features of ESTJ happiness:

If both personalities attended a family reunion, the ENTJ might find themselves uncomfortable. They are not suited to emotional displays and idle chit-chat. If possible, they would be much happier to sneak away, pull out their phone and attend to work-related matters. The ESTJ would have no problem putting work aside for relaxing a day spent at a family reunion. They would laugh and catch up with everyone and leave feeling very content.

ENTJs and ESTJs are both naturally decisive. The difference comes in how they make their decisions.

ENTJs thrive on having the power to make decisions. Some might find them domineering — they tend to act unilaterally, dismissing the contributions of others in favor of their own judgment. Very often, ENTJs concern themselves with the big picture and overlook specific facts or subtle nuances when deciding what to do. Here are some issues ENTJs may have with making decisions:

ESTJs are not afraid of making difficult decisions. They will seek out as many facts as they can but are also guided by what has worked in the past and any additional information gleaned from their personal experience. ESTJs tend to make decisions based on what is practical and generally rely less on abstract or out-of-the-box thinking. Here are some issues ESTJs may have with making decisions:

If both personalities were tasked with planning their family’s holiday celebration, an ENTJ would quickly decide where it should be held and what would be served based on their general idea of how the holiday should be celebrated. No one else would be consulted. An ESTJ, on the other hand, would consider all relevant facts as well as what has worked best in the past. The choice would probably be made without consulting anyone in the family.

ENTJs vs ESTJs and Appearance

ENTJs and ESTJs both are powerful, confident people who know that a proper appearance is crucial in making the correct impression.

ENTJs understand the importance of appearance, especially when making first impressions. They take pride in how they present themselves and are impeccably groomed and confident in their style. They may have a unique fashion sense that will always be appropriate for the occasion. Here are some ENTJ viewpoints regarding appearance:

ESTJs, like ENTJs, also value a well-kept personal appearance. At work, they’ll be neat and tidy — shirts starched, creases ironed, everything precisely fitted — and at home they will wear something casual and functional. Wherever you see an ESTJ, they will look characteristically in control, probably holding themselves with perfect posture while the expression on their face is one of confidence and command. Here are some ESTJ viewpoints regarding appearance:

If attending a business luncheon, the ENTJ would look sharp, dressed in something fashionably appropriate. Their hair would be styled, nails manicured and everything would be in place. At the same meeting, the ESTJ would be immaculately dressed in conservative business attire that they’ve had for years that still somehow looked new. Their hair would have been recently trimmed and their nails self-manicured to conservative perfection.

ENTJs and ESTJs enjoy having likeminded friends who share their values and interests. Although both personalities can be intimidating, once you are considered to be their friend, there are few people more loyal than ENTJs and ESTJs.

At first glance, many might think ENTJs are too business-minded to have friendships. This isn’t true. They value friendship and are very particular with whom they are willing to share that personal part of themselves. They love intellectually curious people who enjoy meaningful conversations. Their friends should beware, however, as ENTJs are known for being highly critical and insensitive even to those close to them. Here are some characteristics of ENTJ friendships:

ESTJs may be tough but they make loyal and trustworthy friends. They choose dependable people as friends who have similar values and interests. ESTJs aren’t much for small talk or shallow discussions and would rather have intelligent conversations and share in activities like sports or hobbies. Here are some characteristics of ESTJ friendships:

If a friend was distraught after a break up, an ESTJ would hold their hand and listen. They would offer practical advice based on the facts presented and do their best to help their friend move forward. An ENTJ would be at an absolute loss in such a situation. They wouldn’t want their friend to be sad but wouldn’t have the slightest idea of what to say or do. They may tell the friend to contact one of their more empathetic friends instead.

ENTJs and ESTJs handle anger very differently. ENTJs are reluctant to show emotion, while ESTJs have no problem telling people exactly how they feel.

ENTJs are not naturally emotional and rarely allow themselves to show anger. To them, losing control of their emotions, especially in public, would be a sign of weakness. Still, if they do become angry, they will not shy away from confrontation but it will be calm, cold and logical. Here are some characteristics of ENTJ anger:

Most often, ESTJs are in control of their emotions. When they get angry, they remain calm but have no problem showing their displeasure in a direct and clear way. They are not passive-aggressive and will not try to sugar coat their opinions in order to save someone’s feelings. Here are some characteristics of ESTJ anger:

If both personalities are working on an experiment in a lab and someone who clearly doesn’t know what they’re talking about criticizes the experiment, an ENTJ will become angry but likely will not show it. They will curtly defend their experiment, explaining in a not very nice way why the person is wrong. If the critic persists, the ENTJ will walk away and be angry in private. An ESTJ in the same situation would become angry and may snap at the person. They could expect a rather precise lecture as to why they were wrong.

Without ENTJs and ESTJs, the world would be a much less interesting and a much more chaotic and leaderless place. These bold personality types might be intimidating for the more reserved personality types but their leadership and enthusiasm are sure fire answers for any person or group seeking direction.

link to ENFP Functions: Cognitive Functions and Stages of Development of this Personality Type

ENFP personality types are known for being enthusiastic go-getters whose combination of charisma and creativity allows them to flourish in social situations. Still, what are the cognitive functions...