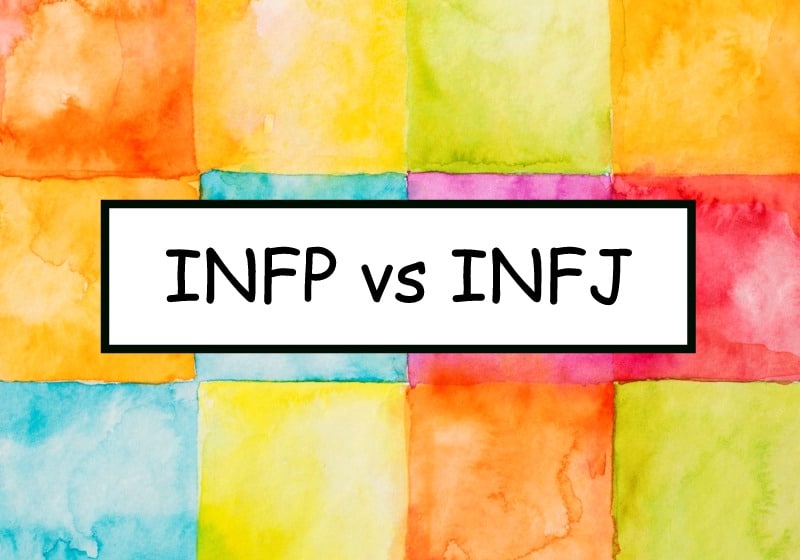 At first glance, both INFPs  and INFJs appear to be very similar. Both shy away from conflict, are caring and creative, and have firm beliefs about doing what is right. But they aren’t always the same, and there are some important differences between them.

If you aren’t sure sure which type you are, take the INFP vs INFJ test.

Both INFPs and INFJs are introverts and prefer having a small circle of friends rather than being highly social with a wide variety of people. INFPs, however, sometimes feel awkward even around close friends, finding it difficult to truly reveal their inner selves. INFJs, on the other hand, will have very deep friendships with a few people and relish feeling completely understood by them.

Friendships for an INFP Personality Type

INFPs love their friends but often prefer doing things on their own rather than spending a lot of time socializing. Features of friendship to an INFP:

Friendships for an INFJ Personality Type

INFJs are independent and private by nature but care deeply about their trusted friends. Features of friendship to an INFJ:

At a gathering with friends where there is idle chit-chat, an INFP is likely to seem lost in thought or preoccupied. If the conversation veers into something more serious, covering a topic that is of interest to the INFP, they will open up and join in, becoming much more animated.

In the same situation, an INFJ will sit back and watch the conversation, taking in the whole scene. Although they won’t volunteer their own thoughts very often, what they do say is likely to be insightful and perceptive.

To be happy, INFPs need to work on behalf of a cause they care about. They also need to have an outlet for their creativity. INFJs also seek meaningful goals and to be creative but don’t need the external validation often craved by INFPs.

INFPs strive to create something with meaning, substance and beauty that contributes to the greater good. If they could, they would solve all of the word’s problems and everyone would live happily ever after. The goals that will lead to happiness for an INFP are:

INFJs are on a quest to discover the greater meaning of the world and to understand what their part in it should be. The goals that will lead to happiness for an INFP are:

When producing a work of art, like a painting, an INFP will be happy to show it off and will actively seek other people’s opinions.

An INFJ will be just as proud as an INFP but will not tend to seek out validation. They want people to understand their work of art, not congratulate them for the act of creating it.

Decision Making for an INFJ vs an INFP

In the Jungian Personality Test, there are four components involved in decision making.

INFPs don’t like to make decisions and tend to get bogged down with sensing and thinking. INFJs are much better decision makers, using their strengths of intuition and feeling.

INFPs are so concerned with what is right, they tend to overthink even the most basic decisions, worrying that they haven’t fully considered everything involved. They can get lost in the minutia (sensing) and will often be unable to see the bigger picture (intuition). When making a decision, INFPs:

An INFJ likes as much information as possible before making decisions. They can usually see the big picture (intuition) and can imagine many possible results. They are also very empathetic (feeling) and thus will consider situations from perspectives other than their own. When making a decision, INFJs:

If an INFP was tasked with deciding where to go on vacation with friends, they would instantly feel overwhelmed. They might get tripped up with small, insignificant details and ultimately be paralyzed by the fear of making a bad choice.

An INFJ would instead research all available vacation options. They would consider everything, including how each choice would affect their friends. After spending a significant amount of time ruminating, they would make a solid decision and not look back.

INFPs and INFJs do not like conflict and frequently try to stifle their anger. In spite of that, both can be provoked by injustice, bullying and by people who belittle their closely held values. INFPs rarely blow up in anger but an INFJ may go off in defense of someone else’s feelings.

INFPs most certainly get angry but are often reluctant to show it. They avoid conflict whenever possible and will retreat to themselves when troubled over a difficult situation. In rare circumstances, an INFP may lash out if responding to what they perceive as a gross injustice or violation of their ethics. A sarcastic or cutting remark in retaliation for such an offense is more likely than a large blow up. They are especially angered by:

INFJs don’t like to express anger either. When wronged, they prefer to mull their feelings over privately, making certain for themselves that they are indeed in the right. Often, by the time they have decided that their anger is justified, the time for expressing themselves has passed. They also worry about how their anger will affect the people around them. The types of things that make them angry are:

If someone mocks a cause that an INFP is passionate about, an INFP may either walk away or simmer in anger. If pushed further on the issue, they may feel forced to say something sarcastic and leave it at that. Only later, in private, will they express their true anger.

An INFJ in that same situation would probably not react at all. They would be angry inside but unless the affront affected the emotional well-being of those around them, an INFJ would not typically say anything.

For both INFPs and INFJs, their appearance is not typically a top priority, but there are a few major differences:

INFPs are more interested in working toward the common good than worrying about how they appear. INFJs are different in that they can go either way. Sometimes, they will be concerned with their appearance, but at other times, they are preoccupied and pay themselves very little attention.

An INFP spends more time in their own head than they do looking in the mirror. They meet appropriate cultural grooming standards but won’t go much beyond that. There will be no facials or trips to the manicurist. The occasional quick hair cut combined with a comfortable old outfit from the back of their closet works perfectly for them. Regarding their appearance, INFPs:

For a job interview, an INFP might not have anything appropriate in their closet because most of their clothes will be comfortable and casual. A trip to the hair stylist would probably also be in order, as they may have been putting off that needed haircut for quite some time.

An INFJ is much more likely to already have something appropriate on hand to wear as they tend to plan for most eventualities. For the interview, they will make sure that every aspect of their appearance is attended to — the right hair, nails, etc. — it will all be completely appropriate for the specific needs and expectations of that interview.

INFP vs INFJ: Summary of Similarities and Differences

INFPs are deeply concerned with their role in making the world a better place. They tend to be guided by principles more than logic, are endlessly optimistic and look for the good rather than the bad in people. They are open-minded, curious to learn new things and are usually tolerant of other people’s ideas. Still, they are rarely swayed from their own world view. INFPs do very well in creative professions and social sciences and are particularly successful in areas involving activism or fundraising.

INFJs, like INFPs, are gentle souls who care deeply about people. They are very protective and nurturing, very often taking up the role as problem solver and counselor to those around them. They are also deeply principled. Unlike INFPs who can be flighty, INFJs are self-disciplined and can make decisions with little difficulty. They don’t generally like surprises and do best in environments that are well structured. Professionally, INFJs are ideal for any type of therapy setting, as their ability to empathize is next to none.

In the end, those who have taken the Jungian Personality Test and are an INFP or an INFJ are lucky. Both personality types have so much to offer a world that can always use a little more creativity and warm, principled people willing to give of themselves. The key is to understand your strengths and weaknesses and use that information to mindfully approach your life in order to be the best person you can be.