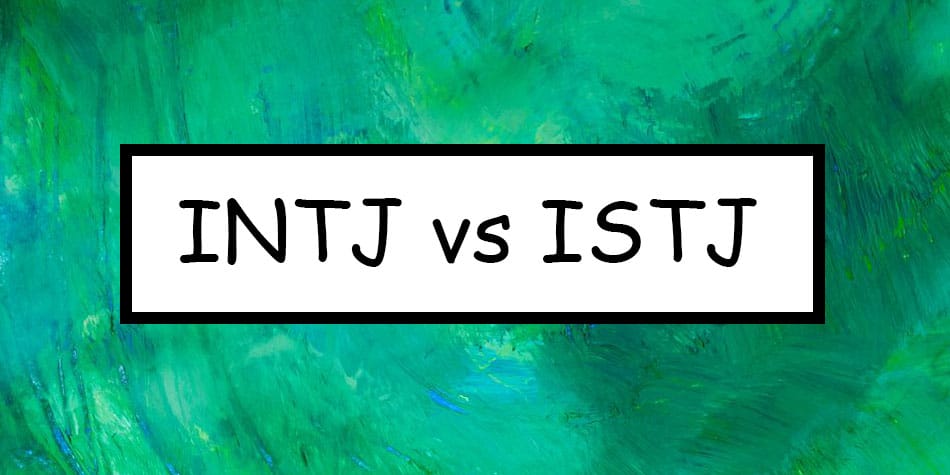 As logically-based, intellectually-oriented introverts, it’s not surprising that the INTJ type and ISTJ type often get compared to and sometimes confused with each other. They are both planners and organizers and usually have a very strong work ethic. If they could, they would spend as much time as possible seeking to improve the lot of others in the world.

But they have a fair amount of differences.

Key Differences between INTJs and ISTJs

Both INTJ personality type and the ISTJ personality type tend to have driven personalities with one track minds that allow them to become completely focused on what they are doing. Perfectionism can be an issue for both the INTJ type and ISTJ type. In their personal lives, they are very private people who tend not to be very self-reflective. They may both struggle in dealing with the emotions of others as well as their own emotions.

A closer examination of both personalities, however, reveals that they have many differences. Here are just a few:

When you look at INTJs and ISTJs specifically, the reason they are so similar is that they share two of the same cognitive functions, the auxiliary and the tertiary function. Their dominant function is different, however, which explains why they absorb information differently. Their inferior function is also different, which is discussed below.

An INTJ’s dominant function is Introverted Intuition, meaning they will focus on the bigger picture and always have their eyes toward the future.

An ISTJ’s dominant function is Introverted Sensing, meaning they will tend to be detail-oriented and focused on the present.

Both personalities share Extraverted Thinking as their auxiliary function. This means that they are both rational and methodical in their thought process and in their actions. They tend to be impersonal and even non-emotional at times because they are so deeply committed to solving the problem at hand.

Both personalities share their tertiary function, as well, which is Introverted Feeling. This means that they both have a moral code that dictates to them what is right and wrong. They feel compelled to live by these values, especially ISTJs, and when they stray from them, they feel a sense of guilt or unease.

An INTJ’s inferior function is Extraverted Sensing, which involves their perception of the physical world.

An ISTJ’s inferior function is Extraverted Intuition, which involves making theoretical connections based on conditions in the physical world.

An INTJ’s dominant function of Introverted Intuition means that they are full of ideas and theories. They can get totally lost in their thoughts as they conceive better ways of doing things with the goal of helping humanity. Here are some of the ways INTJs express their Introverted Intuition:

An INTJ’s tertiary function is Introverted Feeling which involves that nagging bit of emotion that lies in the back of an INTJ’s mind. It tends to be more developed in an older or more mature individuals. Here are some of the ways INTJs express their Introverted Feeling:

An ISTJ’s tertiary function is Introverted Feeling. This may be the reason that some may see them as being judgmental. They are constantly measuring people and actions against their own rigid value system. Here are some of the ways ISTJs express their Introverted Feeling:

An ISTJ’s inferior function is Extraverted Intuition. Thus, there is a small part of an ISTJ that enjoys new experiences and taking risks. This part of their personality usually needs to be developed in order to shine, however. Here are some of the ways INTPs express their Extraverted Intuition:

INTJs and ISTJs — Conflict between the two

INTJs and ISTJs both value logic and have a rational approach to problem solving. Their methods of decision making are very different as are their general perspectives on the world. These differences could prove to be difficult if the two were in a situation were cooperation was important.

An ISTJ needs to make certain that all of their actions and decisions conform to their sense of right and wrong. This will undoubtedly irritate an INTJ who would rather not be stifled by any external standards.

Both personalities love intellectual debate. INTJs may take it too far for an ISTJ, however, who could end up feeling personally attacked even though the INTJ never had that intention.

The INTJ’s out-of-the-box and future-aimed solutions might be very hard to fathom for an ISTJ who relies on tradition and conventional wisdom to guide their lives. It may be hard for them to reconcile their different approaches if they had to work together.

Here are two examples of real life problems that might cause these personalities to struggle:

link to ESFJ Careers: Jobs for the Caregiver to Seek and Avoid

ESFJs are helpers who are sensitive to the needs of others. Their personality types are suitable for an array of different careers. ESFJs come with many advantages and disadvantages that present...

The INFJ personality type longs to find what they believe is a relationship that is without equal. They are loving and caring, devoting themselves to their partners but tend towards...